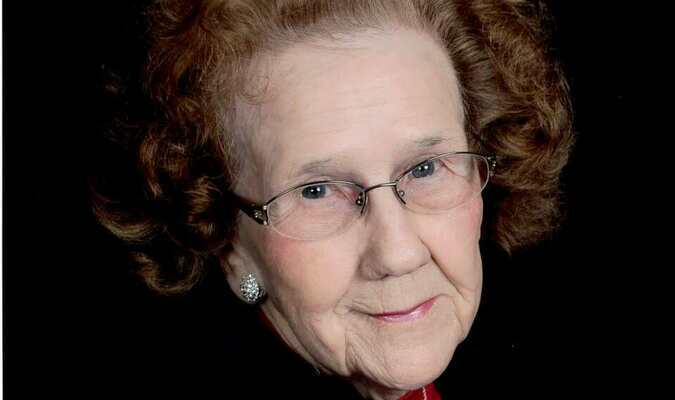 Visitation will be held from from 6 p.m. to 7 p.m. Friday, at the funeral home.

Memorial contributions are suggested to Nathan’s Place, in care of the funeral home.

She was preceded in death by her husband, Dan; her parents; her stepmother, Dorothy Elrod; three brothers, Harvey, Glen and Howard Elrod and two sisters, Erma Misemer and Vera Elrod.

Mrs. Goodrum was born Oct. 2, 1925, near Gridley, Kan., the fourth of 10 children born to E.M. and Sophia (Sauder) Elrod. Her father was an evangelist and the Elrod family had lived in various communities in Kansas, California and Missouri. She was a 1943 graduate of Miller High School.

While working in the office of Barton County Electric she met and fell in love with Dan Goodrum, a young lineman back from the war. They married Nov. 3, 1946, making their home and raising their three children in Lamar. The two had celebrated 67 years together at the time of his death in 2014.

In addition to her role as a devoted wife and mother, she was an efficient and meticulous office manager, working for Reavley Dental, State Farm Insurance, Norris Grain and Three Brothers Supply where she was named Rotary Employee of the Year in 1986. After retiring from Three Brothers in 1990, she shared her time and talent as a volunteer, serving as president of Barton County Memorial Hospital Auxiliary for 14 years. She was honored as BCMH Auxiliary Volunteer of the year in 2009, elected in 2010 to the BCMH Hall of Fame, was named Phi Kappa RBO Woman of the Year in 2010 and Lamar United Methodist Church Woman of the Year in 2012.