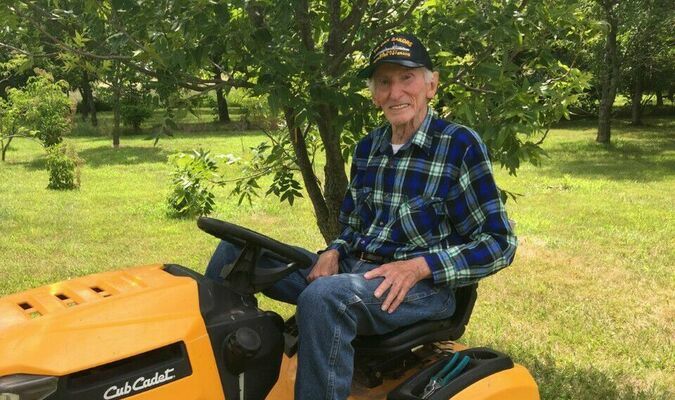 LOCKWOOD- Visitation will be held from 12 noon to 1:30 p.m. Friday at Konantz Warden Funeral Home in Lamar for George Messner, 95, Lockwood, who died Sunday, Jan. 9, 2022, at Cox Barton County Hospital in Lamar. A military service with honors will be held at a later date at the Indiantown Gap National Cemetery in Annville, Pa.

In lieu of flowers, donations may be made to Convoy of Hope or Doctors Without Borders.

Condolences may be left online at www.konantzwarden.com.

He was preceded in death by a son, Ross Messner.

Mr. Messner was born Feb. 2, 1926, in Williamstown, Pa., to George Anthony and Carrie (Shomper) Messner. He attended Williamstown area schools, graduating in 1943. He joined the Navy and during his service he was awarded five medals of commendation for his courage, resourcefulness and devotion to his country. Upon his honorable discharge he attended Penn State University and took classes at the Massachusetts Institute of Technology. He then joined Royal McBee Typewriter in West Hartford, Conn. as a mechanical engineer. In later years, his career took him to Japan, Holland and California, during which time he developed several patents related to electric typewriter technology, toys and multiple other inventions.

In the late 1980s, he retired to Lockwood where he pursued his lifelong interest in agriculture, developing a herd of MRI cattle; the first of that breed introduced to the United States. He also established a fruit and nut tree orchard using his expertise in grafting and hybridizing of novel varieties of tree nuts. He established one of the first vineyards in Dade County and in his 90s developed another patent for a device that maximizes the production of grapes relative to ground space availability, combined with adjustable exposure to the sun. Throughout his life he was an active member in both the New England and the Nebraska Nut Growers Associations. In recent years, he was an enthusiastic member of the Tin Can Sailors, the National Association of Destroyer Veterans.

Wind farms: A windfall or a bag of wind