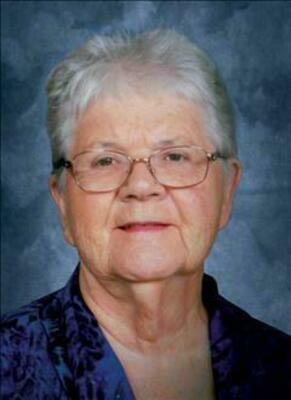 Visitation will be held from prior to the service, beginning at 10 a.m.

Contributions are suggested and made payable to Oakton United Methodist Church Building Fund, in care of the funeral home.

Mrs. Compton was born April 21, 1938, in Altoona, Kan., to Maxine Barton Schlupp and William Fredrick Schlupp. She met Carl Compton on the school bus and they became high school sweethearts. She graduated from Lamar High School in 1955 and on September 23, 1955, the two were married at the Lamar United Methodist Church in Lamar.

Mrs. Compton was very involved in the church and an active member in the United Methodist Women and in Golden Agers at Oakton. She was a supportive farm wife and loving mother and grandmother. She enjoyed growing beautiful flowers and was a 4-H gardening leader. She loved hosting many friends and family in her home.

Mrs. Compton attended Pittsburg State College and graduated with a teaching degree and taught first grade at Lamar before returning to work with Compton Irrigation and the farm full time. In addition to managing the office, she made countless meals for family, employees and customers.