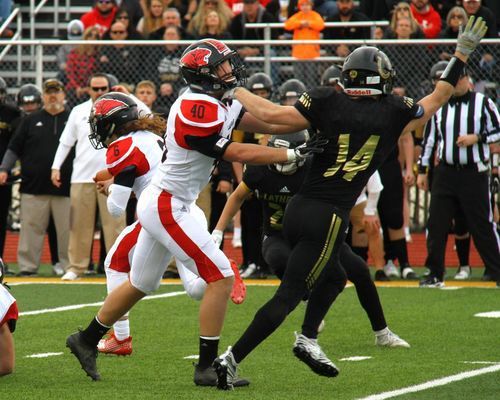 No. 40 senior tight end Travis Bailey blocks for No. 6 senior quarterback Duncan Gepner in semifinal action in Lathrop. The Tigers lost to a Class 2 school for the first time since 2010. 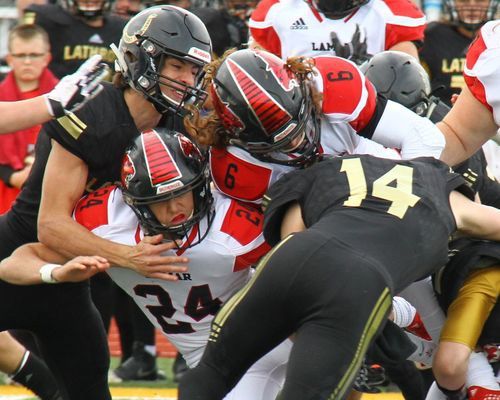 No. 6 Duncan Gepner and No. 24 Landon Hardman, along with the rest of the Tiger running backs, found little room to run in their season ending loss to Lathrop. 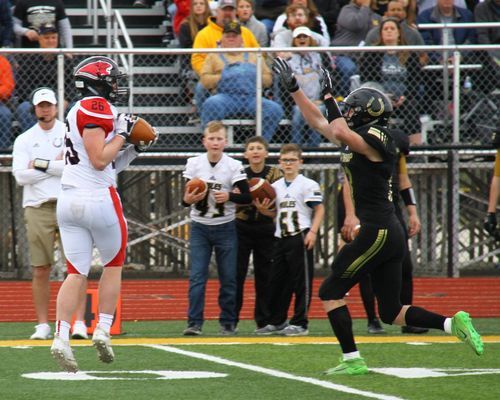 Lamar tight end No. 26 Wyatt Hull hauls in this pass for a first down on Lamar's opening drive. The Tigers took an early 7-0 lead, but less than 1 1/2 minutes later Lathrop answered with a touchdown of their own and went on to defeat the Tigers 28-21. 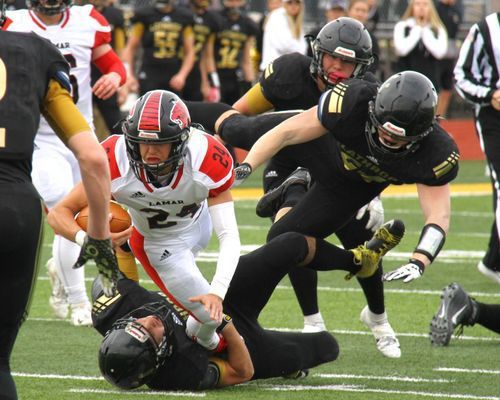 No. 24 senior running back Landon Hardman is brought down after a short gain in the Tigers loss to Lathrop. The Mules defense was flying to the ball all day long. 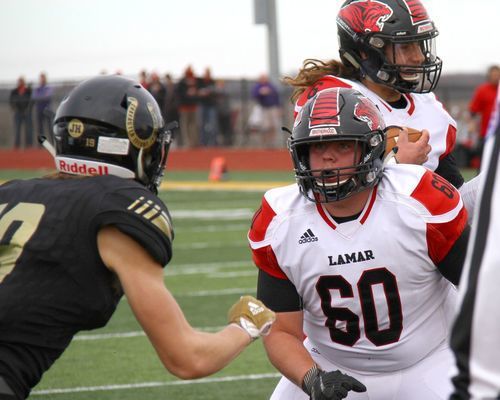 Lamar senior lineman No. 60 CJ Maldonado blocks as No. 6 Senior quarterback Duncan Gepner scores the first of three touchdowns to take an early 7-0 lead. The Tigers streak of seven straight state championships was ended by the Mules by a score of 28-21. 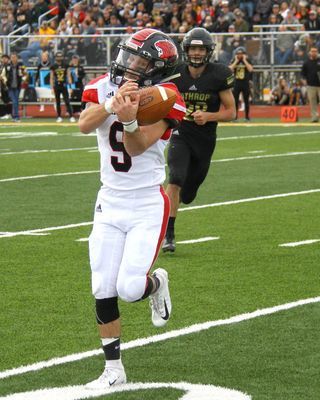 Senior running back No. 9 Trevor Medlin can't quite hold on to this pass in second quarter action against Lathrop. The Tigers ended their season with a 12-2 record. 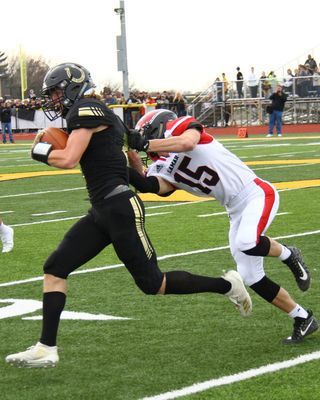 No. 15 Cage Jordan drives this running back out of bounds in the Tigers loss to Lathrop. Jordan was flagged by the official for a late hit out of bounds. A couple of questionable calls kept Lamar from gaining any momentum in the game. 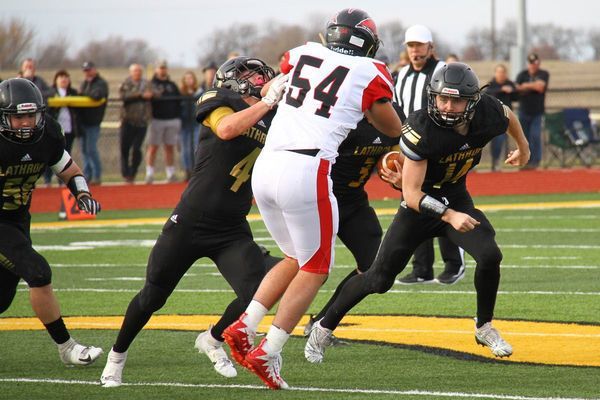 No. 54 junior defensive end Morgan Davis tries to fight off a block to get to the quarterback in action in Lathrop. The Tigers made it to the semifinals for the 10th straight year. 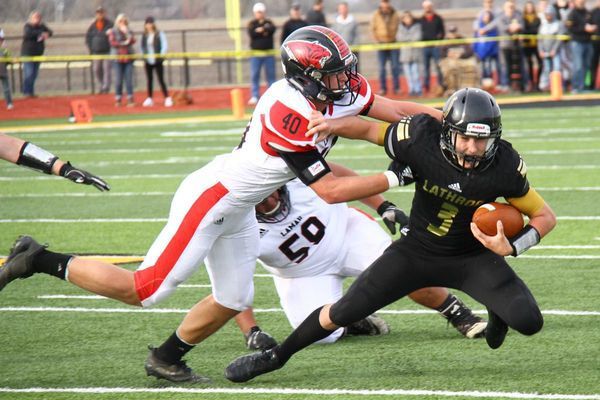 No. 40 senior linebacker Travis Bailey makes the tackle on this Mule running back. Also shown is No. 59 Juan Juarez. 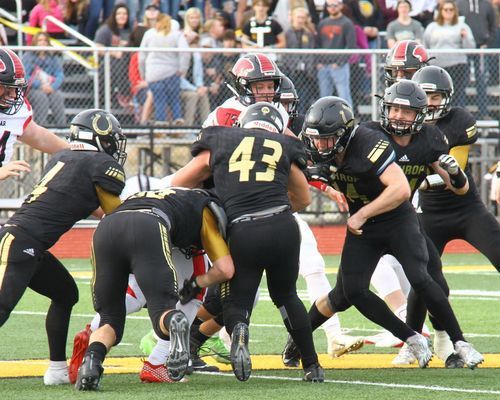 The Tiger offense found little running room in action against Lathrop. The Mule defense was extremely fast and swarmed to the ball. 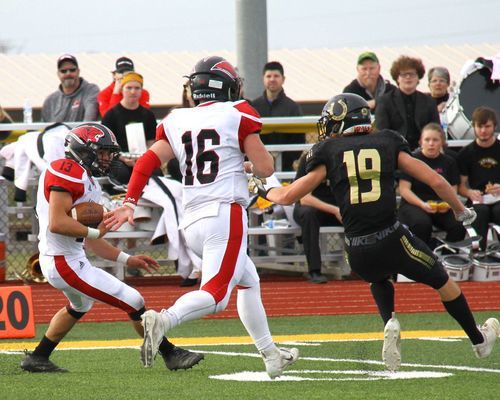 No. 16 Case Tucker is downfield to block for No. 13 Daniel Contrares after a long run. The Tigers could not come back from a 21-7 halftime deficit in their 28-21 loss. 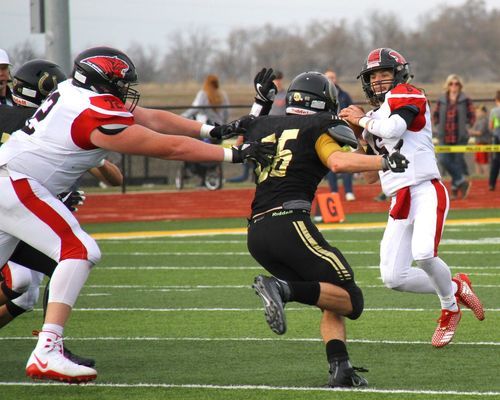 Lamar quarterback No. 6 Duncan Gepner was rushed, hurried and sacked on almost every pass play as the Mule speed created problems for the Tigers. Here No. 72 Connor O'Neal tries to give Gepner time to make a connection. 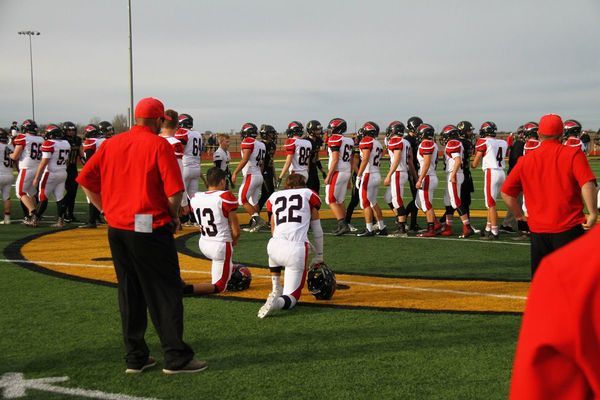 Seniors No. 13 Daniel Contrares and No. 22 Isaac Collins take a knee and watch their teammates congratulate the Mules team after the Tigers loss to Lathrop. The finality of the situation begins to set in as the Tigers are knocked out of the playoffs. 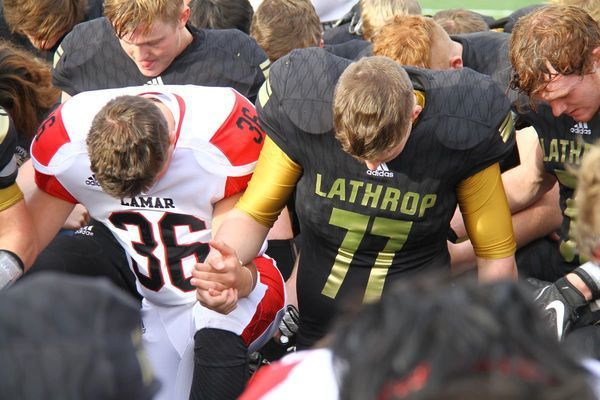 Lamar freshman No. 36 Stetson Wiss and a Lathrop player join hands as Duncan Gepner leads the teams in prayer. The Tigers have been asking the opposition to join them in a post game prayer since going to Valle Catholic almost three years ago.
Previous Next